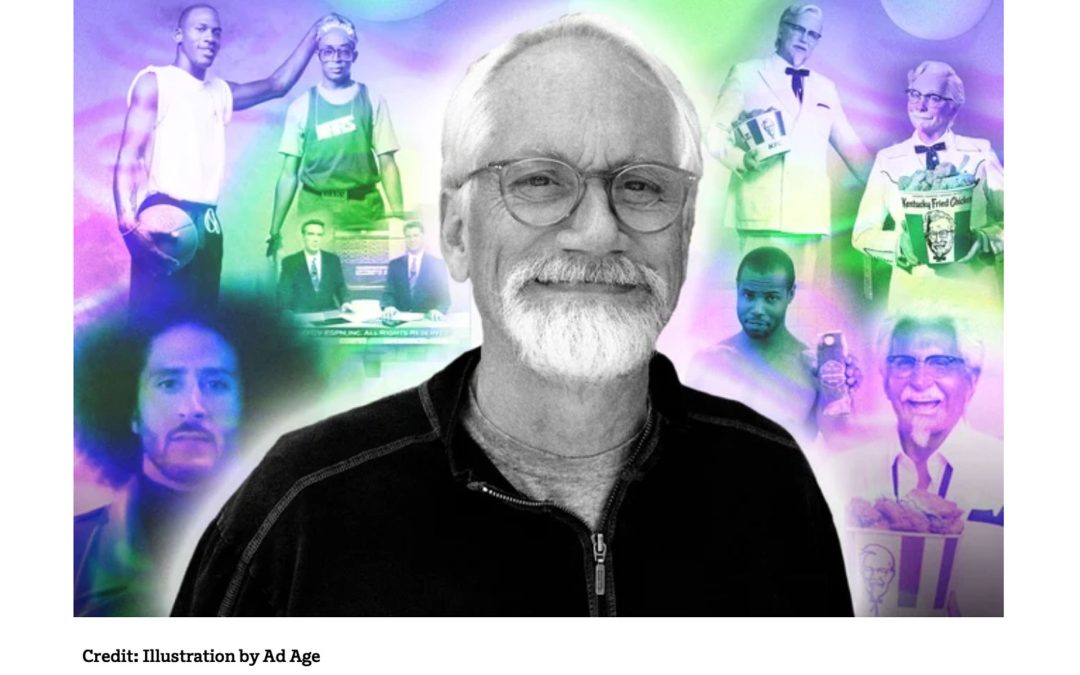 JEFF GOODBY ON WHAT DAN WIEDEN TAUGHT THE AD BUSINESS

If advertising could have holy people, Dan Wieden was certainly one of them. There is a cold wind in Portland tonight.

It was 1983 and I was talking on the only phone we had in the tiny office of our new company. On the other end of the line were two guys named Dan Wieden and David Kennedy, calling on a pay phone down the hall from their warehouse place.

What did we talk about? It’s lost in time. I just remember the let’s-blow-the-cover-off-this-advertising-thing energy of it all. We were like teenagers planning a party with our parents gone, and Wieden was talking like the guy who had the fake ID.

We all know what happened next—or at least we think we do. Their first client, Nike, is running ads about waffle sole construction. Phil Knight writes an obscene manifesto vowing to—same deal—blow the cover off the advertising thing. Wieden, happy to oblige, says maybe this now-famous Walt Stack commercial we shot should end with, I don’t know, something inspired by the words of a guy about to be executed in Utah.

And from there: “Revolution,” “Don’t Settle for Walking,” “Bo Knows,” “It’s Not About the Shoes,” Mars Blackmon, “If You Let Me Play,” SportsCenter, “Ford Proud,” multiple Kentucky Colonels, “Runways,” “Grr,” “Cog,” Kap, “The Man Your Man Could Smell Like,” and a whole bunch of things now forgotten that are better than 99.999% of the stuff in the history of advertising.

If it was in there, he got it out of you. And he did it with love. For Wieden, it was always about other people.

Although he wrote perhaps the most famous tagline ever and shepherded dozens of the best creations in history, I never once heard the guy talk about himself. Dan realized that the real gold lived inside the army of sometimes misfits and always interesting people around him. And he created a whole universe lubricated to get every last bit of it out. It was much more than the rather intimidating “Fail Harder” sign they put up. It was total forgiveness for whatever was about to happen. It wouldn’t be too extreme to call it grace.

Everyone who ever worked with Dan knows exactly what I’m talking about.

Which is not to say Dan didn’t have a competitive side. I’m happy to report that I sat with him a couple times in the past two decades and relived some of the battles we had. Pitching against W+K meant no sleep, lots of food in cardboard boxes, searing introspection, and the feeling that you always needed something better than what you had. Ironically, Dan even made our people better, and I suspect he knew that.

And then there was the Nike thing. We had a bit of it for a minute, but it always really belonged to him.

One day, I was walking in Cannes when a young creative guy came up to me excitedly and asked to have a selfie. “Thanks, Mr. Wieden,” he said and ran off. This gave me a thrill, to be Dan for a minute. And then I wasn’t.

One definition of creativity might be the bringing together of distantly disparate things under high pressure. Dan’s genius was to bridge distances never seen before in advertising, from Lou Reed to a scooter, from Bo Jackson to hockey, from an out of work quarterback to a moral imperative. Before Dan, advertising simply didn’t cover that much ground. And in doing so, the creations of Wieden+Kennedy became not just popular culture, but culture arguably more popular than any of the elements.

Such was the scope of Dan’s grace. It galloped across whole worlds.

Wieden gave what we all do a certain deep dignity. Honor that and act accordingly.